One of the GVIA's greatest achievements in whole of industry engagement has been via its grower-led irrigation project, conducted in partnership with Sundown Pastoral Company, and initiated in 2008. The project was initially funded under the Raising National Water Standards Program by the National Water Commission (2008-2012). Due to the quality data produced, additional funding was presented from the CRDC (2012-2022) and the Federal Government’s Smarter Irrigation for Profit (SIP) Program (2016-2018, phase 1 and 2019-2022 phase II), which has enabled grower-led irrigation research to continue for the past fourteen years in the Gwydir Valley. As part of the project the GVIA host and Annual field day. The latest GVIA Field day booklet summarises the event held in February 2021. 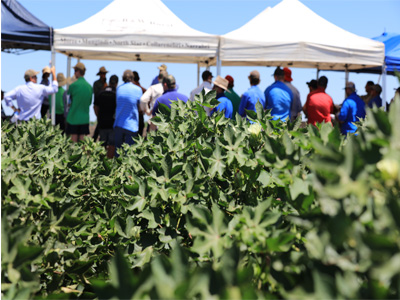 The GVIA project is a grower-led initiative focused on commercial reality. The project aims to complement existing data and enable extensive collaboration with industry and research partners. Crucial to this research is the commitment of the grower partners to invest their time and resources into the trials. Their involvement ensures that there is a valid commercial assessment of the systems under review. The irrigation efficiency trials are intended to explore the resource efficiencies; water, energy and labour, of the various commercial irrigation options available to Australian producers. Automation and optimised irrigation have been primary drivers under SIP2, with automated siphons and bankless developments a feature. Throughout the project we have worked with commercial and research partners across industry. During our 2021 annual field day we interview representatives from University of Southern Qld,  Deakin University, EnviroNode IoT, GoannaAg and others.

There have been several components to the research including the Keytah system comparison trial, the Telleraga pipe-through-bank trial (2008), the Red Bank row configuration and water regime trials (2010-2011), the Keytah and Auscott optimised row configuration trials (2014-2017) the initial irrigation automation trial with smart siphons (2016-2018), an investigation of siphon-less irrigation options (2018-2019) and the current demonstration of the application of the latest digital technologies for precise automated irrigation. Follow the link for the 2017 GVIA field day video.
As the Keytah system comparison trial is run every second season, the GVIA compliments it with additional trials that focus on additional tools and techniques designed to optimise irrigation in the cotton industry. This helps to maintain momentum for the GVIA and growers, but also provides an opportunity for the project to be flexible in meeting grower needs.
Critical to the success of the GVIA grower-led irrigation research is the support from the Australian Government Department of Agriculture, Water and the Environment as part of the Rural R&D for Profit program. This program is now in phase II and brings together the five irrigation industries of cotton, sugar, dairy, rice and grains, research organisations and farmer groups. Together some of Australians best irrigation researcher are working to enhance the optimisation of irrigation and improve the profit of producers. More detail on the Smarter Irrigation for Profit 2 project can be found on the project website