The project was initially funded under the Raising National Water Standards Program by the National Water Commission (2008-2012). Due to the quality data produced, additional funding was presented from the CRDC (2012-2022) and the Federal Government’s Smarter Irrigation for Profit (SIP) Program (2016-2018, phase 1 and 2019-2022 phase II), which has enabled grower-led irrigation research to continue for the past fourteen years in the Gwydir Valley. The final report will provide more detail on each of the systems and on automation.

Since 2009 the Keytah System Comparison trial has been gathering comprehensive and insightful data to benefit the industry as a whole. Data collected during the 2009-2010, 2011-2012, 2013-2014, 2015-2016 and most recently 2017-2018 has proven extremely valuable. The 2020-2021 season saw significantly more research into automated irrigation with both a new bankless channel setup, a new EnviroNode Farm Automation Controller (EFAC) for the Smart Siphons and a new surface drip setup. Some of the primary drivers for a transition towards automation is the optimisation of irrigation events to improve water use efficiency, and the improvements in labour resourcing. 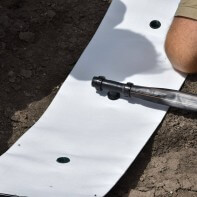 Updating the Drip System: During 2017-2018 significant investment was made updating the filter setup for the drip system. It is essential that any drip system has suitable pumping and filter capacity to meet peak crop water demand.
For the 2020-2021 season the drip field was been fitted with new surface drip tape. The system utilises the existing pump and filter set up, but instead of sub surface tape it utilises surface tape which is replaced each season. The tape is easily installed and fully recyclable.

Automation of Siphons: The Smart Siphons were installed in 2017, they are a small pipe through bank, fitted with a rotating elbow, and enable up to 150 siphons to be started at once remotely. Automated control of the siphons is utilising the EnviroNode IoT solution. The EnviroNode Hub provides wireless control of siphons, sensors and monitors the channel level and water advance sensors in the field. The EFAC (EnviroNode Farm Automation Controller) enables the smart siphons to be started or stopped remotely via the EnviroDash from any web enabled mobile device. 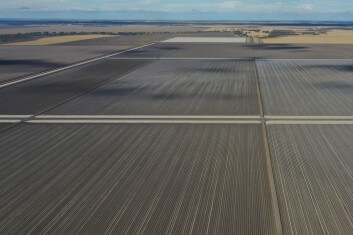 New Bankless Channel Field: Many irrigators have moved to bankless channel systems to help managed labour and energy resourcing. IN 2021 the trial continued to collect data from the existing bankless channel field, and also collect information on a new larger setup. The new W567 is a large 500ha system that has three sets of five bays. Water is reused as it progresses through the five bays in each set. Reusing water through the bays reduced the tail water that has to be returned to the storage. This bankless setup has been fitted with automated gates which will enable remote control of irrigation.

The 2021 GVIA field day was held at Keytah in February. The day gave growers and consultants an opportunity to see the field activities of the project and to discuss the findings. The 2021 GVIA field day booklet includes information on the GVIA project as well as other research being conducted as part of Smarter Irrigation for Profit 2. For each of our annual field days we develop brochures providing the relevant information for growers. Download your copies of the 2018 brochure on Grower-led irrigation automation and nitrogen optimisation or the siphon-less irrigation 2019 brochure.

The project is one of the many grower led optimised irrigation site that are a feature of Smarter Irrigation for Profit 2. The specific intention is to collect relevant commercial data and to provide growers confidence in how new and innovative irrigation technology can fit into their operations. See why growers see this as important.

During the project, the Gross Production Water Use Index (GPWUI) was calculated for each of the systems. The GPWUI is used to enable a comparison of the systems across years and across farms. It combines total seasonal water use (irrigation water and rainfall) with soil moisture and yield. The higher the GPWUI the more water efficient the crop.
In the 2020-2021 season there were establishment and disease issues in the lateral field and in the smart siphon field. These have impacted the results for these fields.

The most important finding is that the greatest differences in GPWUI and yield are between years, not between systems. Results show significant variation in the GPWUI between years principally due to climatic conditions. Each of the seasons have been very different, from cool and wet, to hot and dry, with one season where there was no irrigation or rainfall to finish the crop. We have an inherently variable climate so choosing a system that allows your to manage the variability on your farm is critical.

The 2017-2018 season produced the highest yield for each of the four systems, with the bankless channel system the strongest performer yielding 14.8 bale/Ha and having a GPWUI of 1.29 bales/ML. Both the siphon and the lateral also performed strongly with yields of 14.9 bales/ha and 14.6 bales/ha respectively.  The GPWUI results for both siphon and lateral were also good at 1.25 and 1.32 bales/ML.

Irrigation system choices consider yield and water use efficiency, as well as the labour resourcing needs and the energy requirements of the systems. Many cotton growing regions have low reliability of irrigation water and this will also impact decision making.  Growers are actively investigate how they can automate irrigation to further improve the efficiency of all these inputs.

Automation of irrigation is one of the focus areas of Smarter Irrigation for Profit 2 and in 2020-2021 the Keytah site was be part of this focus. Automation has several benefits; it improves labour resourcing and enables more timely and uniform applications. Automation is possible with all four of the keytah systems, the drip and lateral systems can readily be automated. The siphon field has been fitted with Smart Siphons controlled by EnviroNode Farm Automation Control (EFAC) and the Bankless Channel is fitted with Padman Stops Bankless Channel Bay Outlets fitted with Auto-winches enabling remote irrigation. In 2020-2021 we also investigated how the IRRISENS Smart Sensing system could be utilised in a large bankless field and how the GoField Plus (Soils probes fitted with Canopy Temperature Sensors) could be utilised to improve irrigation scheduling and management.

The siphon field had significantly higher labour requirements, but along with the bankless channel designs it has very low operating energy costs. In 2020-2021 the new bankless design enabled improved efficiency in fuel consumption and machinery use. In contrast, both the pressurised systems, the lateral and drip, require less labour, although the labour does have to be skilled to effectively manage these systems. The do however have higher operating energy and capital setup costs. 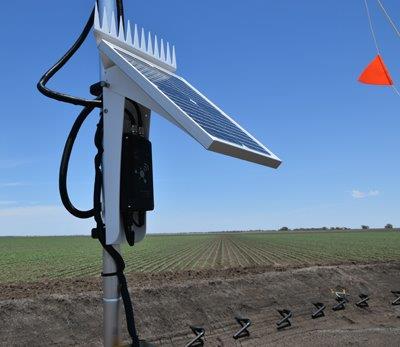 The siphon field was fitted with small pipes through the bank attached to Smart Siphons in 2017-2018. Capital set-up costs for the smart siphon will be significantly influenced by field specifications and installation process adopted. The following links will take you to the 2016  brochure, the 2018 report and the video which provide more detail on the project.

The project has shown that although important, water alone is not the only driver growers must consider when making decisions on irrigation systems. The reliability and the potential yield achievable under each of the systems are key considerations for growers. In areas where there is low reliability of water capital costs will be critical, as will labour resourcing, energy costs, maintenance and servicing. This project provides growers a detailed data set to inform their irrigation infrastructure investment decisions.
The trial has been well received by growers and industry since its inception, with data continually enhancing grower’s capacity, knowledge and understanding of the efficiencies of alternative irrigation systems.

Many growers have altered their irrigation systems following a visit to Keytah, or from discussions with people involved in the project, which is an extremely pleasing adoption rate.