The Gwydir Valley, like most regions developed for irrigation, has undergone significant industry reform since establishment.  Whilst local reforms of water sharing and management started almost immediately following the construction of Copeton Dam, the major national and state-based reform agendas began in the early 1990's.  This was the beginning of the reform trajectory that the industry remains on today. In 1994, the Council of Australian Governments established a water reform framework for participating states and territories which formalised the reform process nationally.  Over time the total volume of water available to be accessed by irrigators has been reduced significantly as a result of these reforms.  New South Wales and Commonwealth environmental water managers are now responsible for 28.5% of high security entitlement, 29% of general security entitlement and 13% of supplementary entitlement for environmental use, as well as reducing groundwater entitlements by an average of 55%.

The history of reform and the reduced volume it can be attributed to is outlined below in a Summary of Water Reform.

Note 1: The impact of the Murray Darling Basin Cap is not easily measured due to records but the comparison on extractions between Cap, Water Sharing Plan and Sustainable Diversion Limits provide a relative scale of impact.

The Murray Darling Basin Cap on diversions (the Cap) was established in 1995. This was an agreement to ensure that extractions, as represented by the levels of development in 1993/94 did not grow.  This established the first limit of extractions for valleys within the Murray Darling Basin, including the Gwydir Valley, explained as a theoretical bucket of available water, which was now to be shared amongst users.

Although, after the establishment of the Water Management Act 2000, the NSW Government, through the Council of Australian Governments became a partner in the National Water Initiative (NWI) as agreed to in 2004.  Under this agreement, each state and territory made a commitment to:

The NSW Government established the Water Management Act 2000 as a means to provide a framework to account for the management of water resources and share the now limited resource between users. These became known as Water Sharing Plans.  Following the NWI, the Water Management Act 2000 and subsequent Water Sharing Plans therefore had an expanded scope and national direction.  These plans were required to ensure that extractions remained below the Cap. Irrigator access was significantly reduced below historical levels to achieve this and the bucket of available water was further reduced.

For groundwater, due to the significant reductions in inland aquifers, the Achieving Sustainable Groundwater Entitlements (ASGE) program was created at the development of groundwater Water Sharing Plans. This was to establish and implement sustainable groundwater extractions within the inland groundwater systems which were at risk of over-extraction i.e. water use at times and in some areas, greater than the aquifer's ability to recharge.  As a result, entitlements in most inland systems, including the Lower Gwydir were reduced to be a less than the calculated sustainable yield.  These reductions in available groundwater are displayed as water droplets. 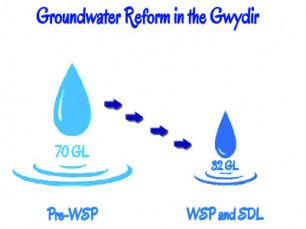 All water within the Gwydir Valley is managed through the implementation of a Water Sharing Plan, designed to meet the NSW Water Management Act 2000, with some conditions still remaining within the NSW Water Act 1912.  Each of these Water Sharing Plans (with the exception of the Great Arestian Basin plan) are also now required to be compliant with the Commonwealth Murray Darling Basin Plan 2012, including Sustainable Diversion Limits by 1 July 2019. These limits have re-set the bucket for all Murray Darling Basin water resources.

The Sustainable Diversion Limits for the Gwydir Valley surface water resources require 42GL of long-term average annual diversion entitlements to be recovered for additional environmental purposes above the Water Sharing Plan.  Currently, NSW and Commonwealth recovery can be calculated at 46.9GL resulting in 4.9GL over recovered i.e. purchased over and above the Basin Plan requirements.  For more detail on the progress of water recovery, see the Murray Darling Basin Plan website.

Due to these early reductions in groundwater, the Sustainable Diversion Limits for the Gwydir Valley groundwater resources do not require any additional entitlements to be recovered for the environment as the MDBA have accepted NSW's implementation of sustainable yield within the valley.